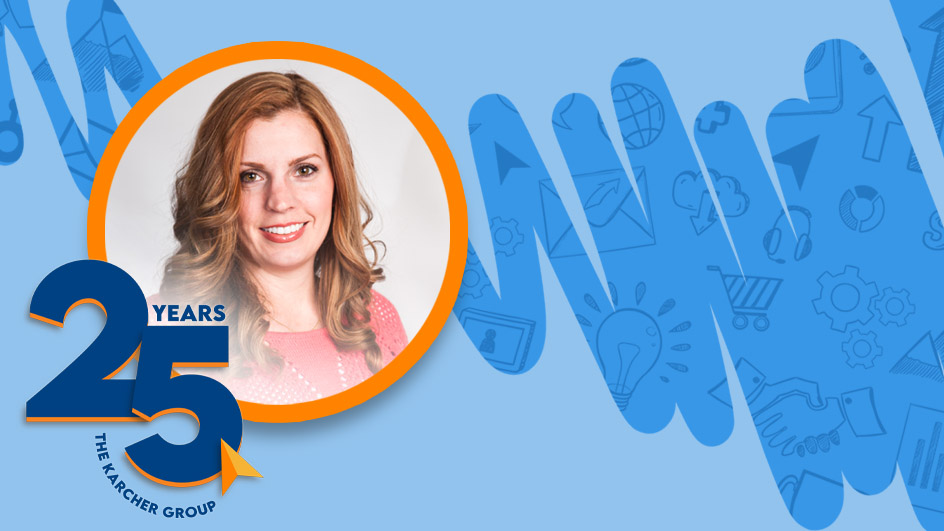 It’s rare to find a company whose mission goes beyond buzzwords or trite taglines. I first heard of The Karcher Group in 2011, and it took all of one meeting to realize that this was a business whose walk matched their talk.

At the time of the meeting, I was doing freelance content marketing and copywriting with a small content marketing company in Columbus, OH. Geoff Karcher, Patrick Willoughby and Josh Gordon drove two hours south from North Canton to meet me and the owner of the company to discuss a possible merger.

While it was an interview of sorts, it was also just a good time sharing a meal with three men who clearly cared very much about people. And of course, in what I would learn was in true TKG fashion, there were wings and beer involved.

One thing I specifically remember from that meeting is walking away with the feeling of being seen and heard. It wasn’t that I was just listened to politely because I was a stranger, but that I was genuinely seen as a valuable contributor to the digital marketing space. This was a pleasant surprise, to say the least.

I came to content marketing somewhat unconventionally, in that Joe Pulizzi had only recently begun specifically leveraging the term “content marketing” to describe using words, images and social media to reach a target audience on the Web.

So, like many writers in the mid-to-late aughts, I discovered digital content marketing by accident. I was writing a semi-popular personal blog and because I have what the kids like to call “zero chill” I started developing my own strategies for attracting and capturing new readers. I was funneling without necessarily knowing I was funneling, using Twitter, Facebook and Pinterest to pique interest and drive folks to my website.

All that to say, I came to this initial meeting as a writer first, and an accidental content marketer second. Instead of this fact putting off the dudes who were already running a successful digital marketing and SEO agency, it intrigued them.

At that dinner, I was asked for my ideas and was actively listened to while presenting them…and I was pleased to discover that this openness and listening was not a one-time deal. In fact, throughout my time at TKG, my ideas were often not only welcomed and embraced but solicited, encouraged and supported.

One idea in particular that grew into its own beast was building brand stories for clients. I was given a wide lane to develop a process that helped us to dig deep into a client’s “why.” At the end of the day, any red-blooded American can make a product or deliver a service, but what was special about this product and this service? What made people come to work? Why did someone’s great grandad start the company in the first place? What values kept the business running? What are the non-negotiables for key stakeholders? If not this business, what other type of business would the founders have built?

I used this process to interview dozens of CEOs, administrative assistants, floor workers, technicians and other employees from all levels of each company to find the foundational throughlines that were felt from top to bottom of the business. It was fascinating to see the words, ideas and concepts that bubbled to the surface for each company. Often by the end of the interviews, I would have one key phrase that described the very heart of the business in about six words or less.

Through this process, I was able to give back to clients what I had been given in that initial meeting with TKG: the opportunity to have someone see, hear and value them for what they bring to the table...even if on the surface what you bring to the table is, like, tubes. Or plastic enclosures for electrical components. Or something else the greater public has never heard of but your clients absolutely couldn’t function without.

I always knew I had done a good job presenting a brand story when I made the client “misty.” I don’t know if he will admit it or not but one of my proudest moments in business is getting Geoff Karcher himself to have a bout of allergies when I presented the brand story for TKG itself.

You want to know what that brand story was rooted in? People. The heart of TKG has always been about people…what people do for their customers through their businesses and how working with people in harmony on project after project to achieve their goals is better than working alone. And finally, how when we focus on "people first" and really hear, see and value them, we create a whole heap-load of win-wins.

(Side note 2: there were plenty of times I saw how creating win-wins meant that we didn’t win a piece of business. Watching this happen is where I first noticed the courage and kindness it takes to deliver a "people first no” over a “business-first yes.”)

After my time at TKG, I ran my own small business for two years. I modeled much of how I ran my business by what I learned, observed and felt as a team member at TKG. My business was fiercely "people first" and it gave me the opportunity to work with companies like Honda, Edward Jones, Owens-Corning and The Ohio State University.

Using that philosophy during the two years of my business even allowed me to navigate one of the toughest times in my life, both personally and professionally. I knew I had officially honored the TKG "people first" spirit when someone said to me, “I appreciate how you handled that situation. I really felt seen and heard by you.”

I am currently embarking on another adventure as a critical care nurse (yes, I decided to pursue a career in nursing in the middle of a global pandemic…see also “zero chill” above), but I often think of my time at TKG. Many of the skills I bring to the bedside are a direct result of what I saw modeled at TKG.

All that to say, when you’re truly "people first" it doesn’t matter what business you’re in, only how your business reflects your heart for your customers. TKG could be in the business of selling toilet seats and I’d still have walked away from that first meeting feeling the same way. Because "people first" isn’t what they do, it’s who they are.

Connect with Sarah and support her on her new journey as an RN at Mount Caramel Health System.